Common Murres in Maine,  the Growth of the regional population over the last 35 years.

I am building this website, and hope to expand on this subject. ( just started this page February 12 2016.)


There are Murre seen almost everyday on trips to Seal Island May to early August.

The regional population is growing as have the populations of Razorbills and Puffins in the Gulf of Maine.  The populations of all three of these species of alcids have been swelling in our direction during the spilling to the west from  small crowded islands off Grand Manan 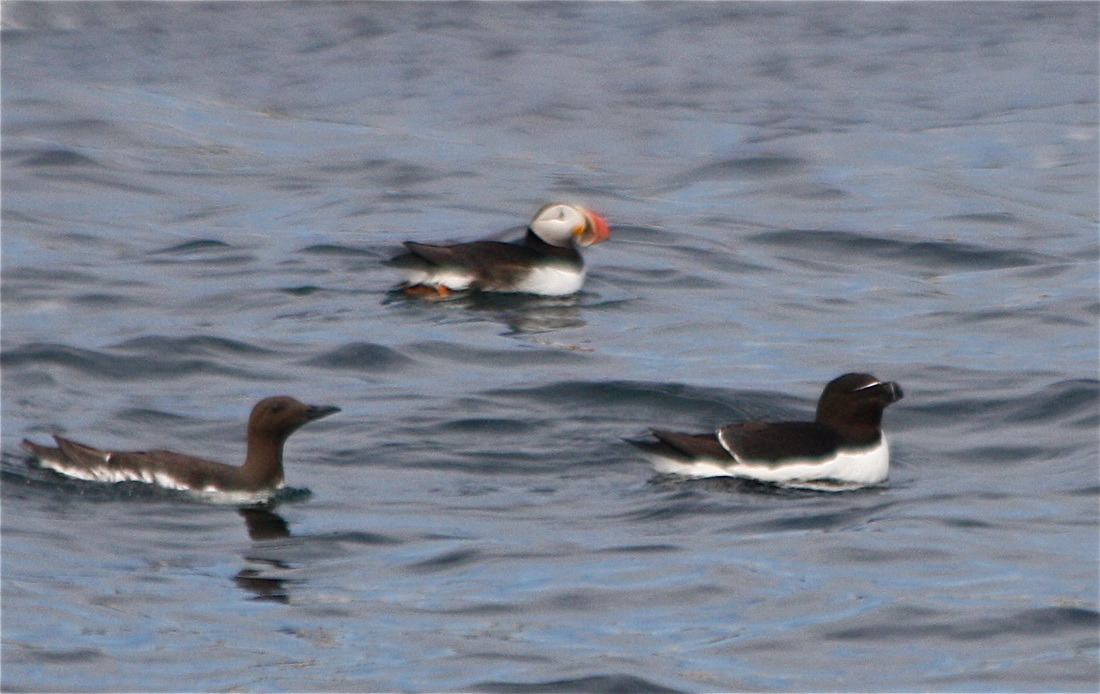 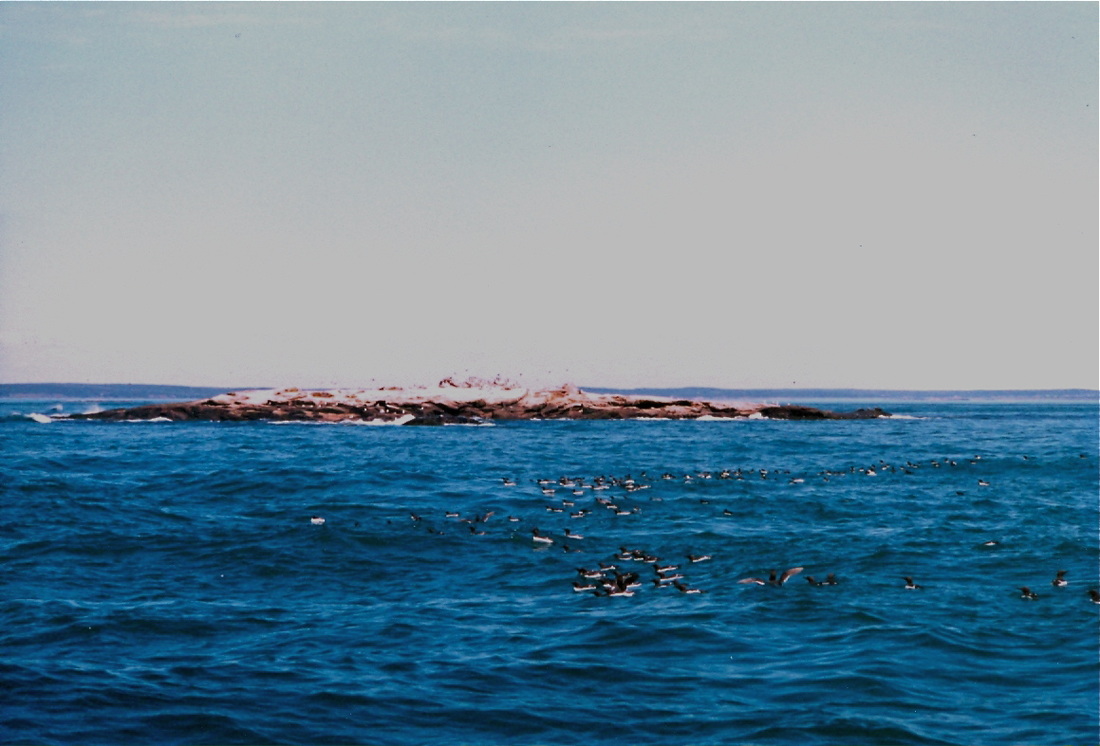 Yellow Murre Ledge June 5 2004,  not very large, at high tide it might take about 10 minutes to crawl around it, you could thorough a rock clear over it East to West, North to south you would need a pretty good arm to do so, the point being that  growing populations of Razorbills and Murres could fill the available habitat and inspire crowding fueled emigration fairly rapidly. As has apparently happened. 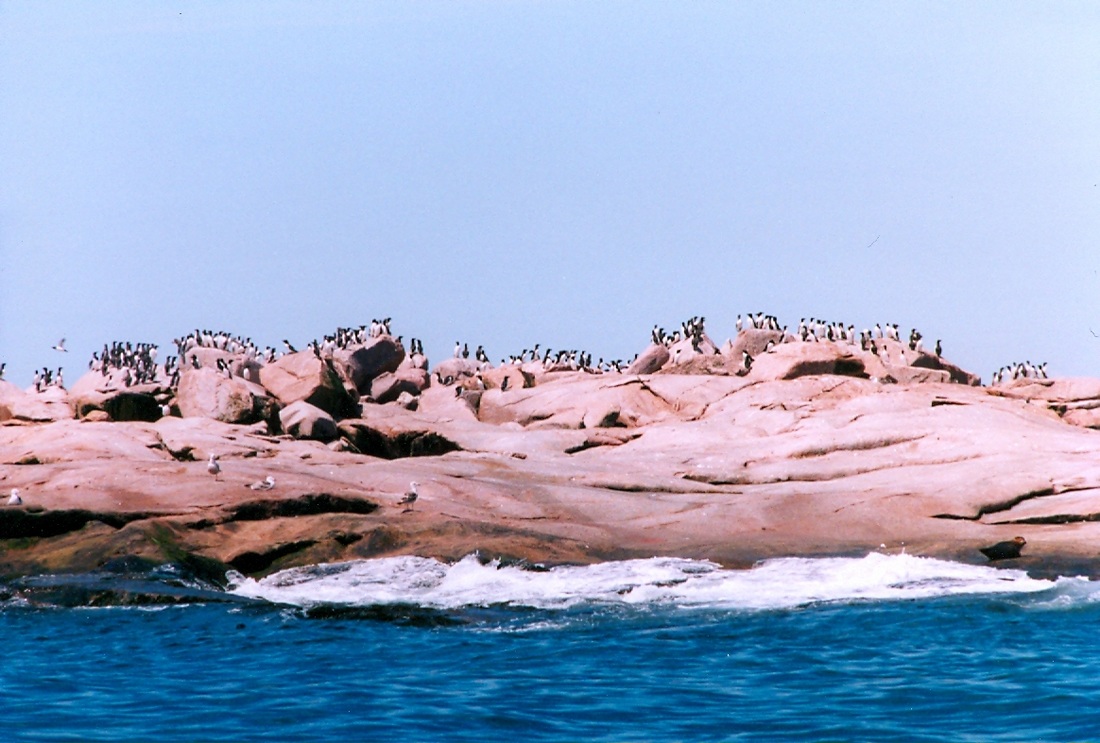 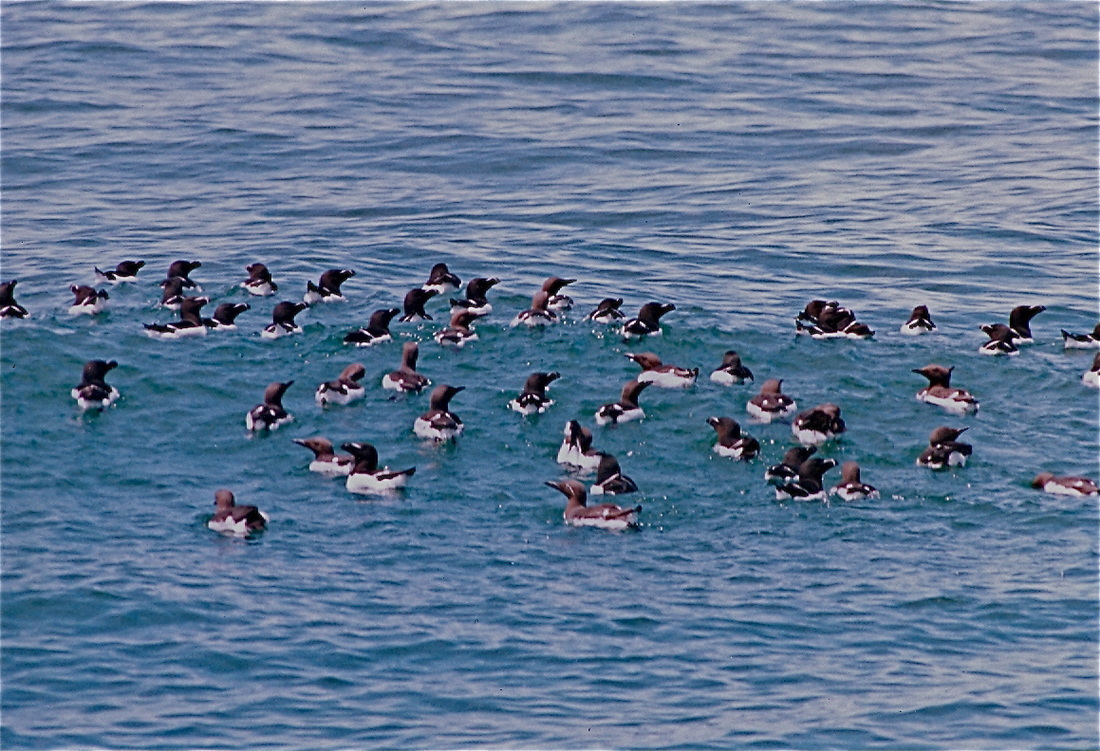 
the Atlas of Eastern Canadian Seabirds, 1975, indicates no murre breeding in Nova Scotia. There is a breeding site indicated on Cape Breton Island Nova Scotia,  in the account for common murrre in the Birds of North America Series from 2002, still that is a long way from Grand Manan. 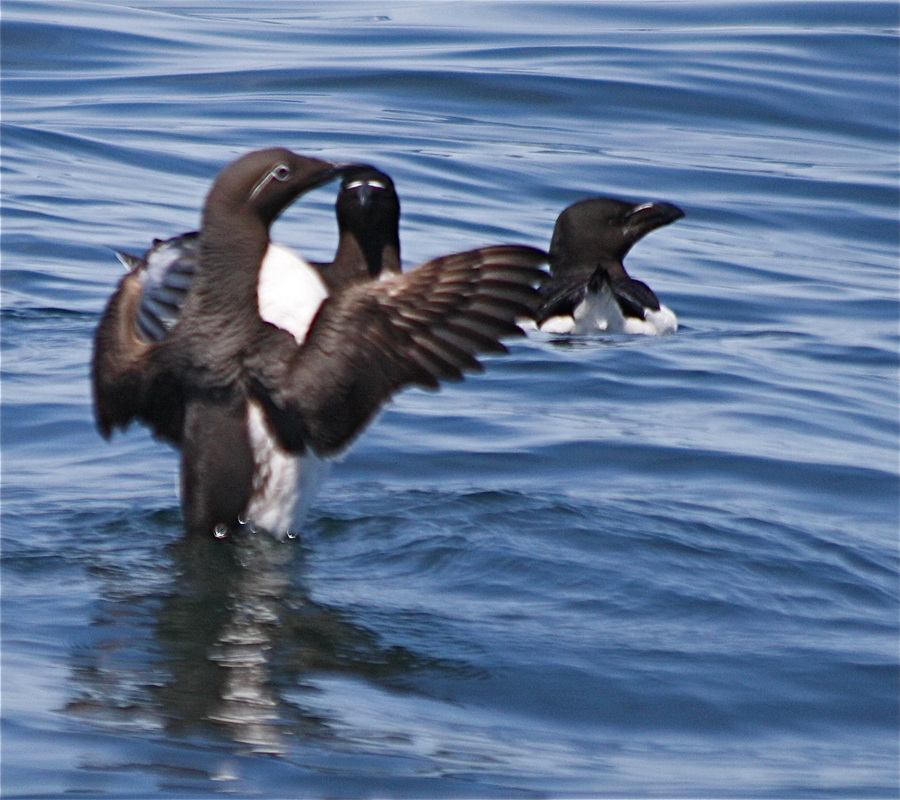 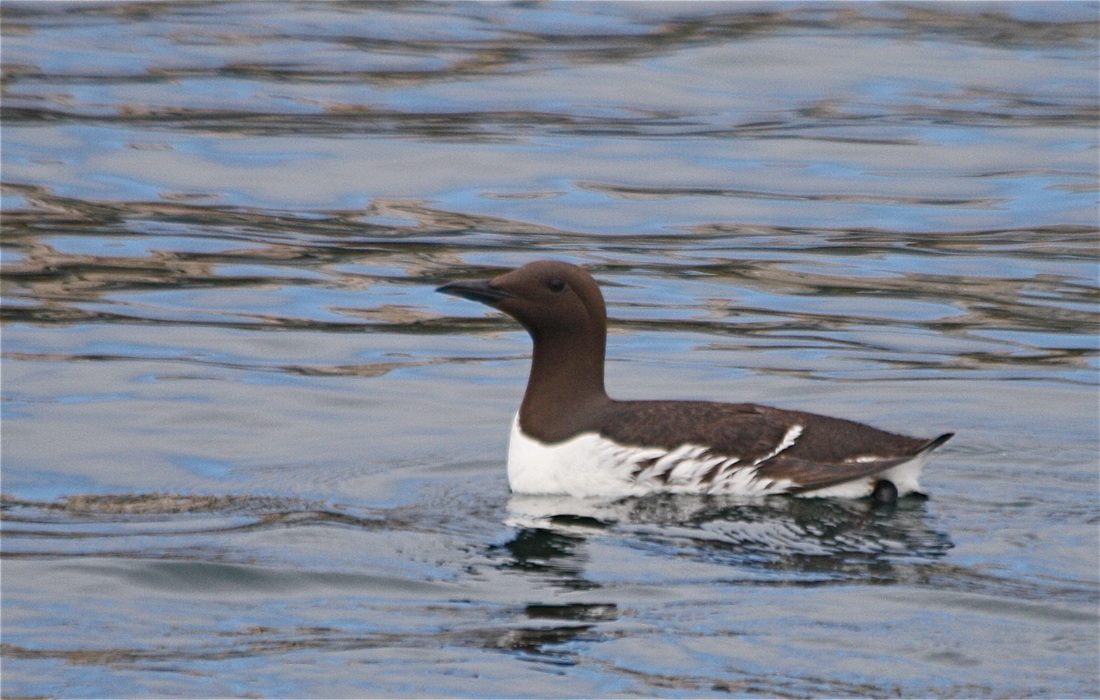 So how? and why? did these birds decide to colonize a new, (though clearly from the name historic) breeding site so far removed from where they themselves had been raised? and how many individuals were involved in this caper? 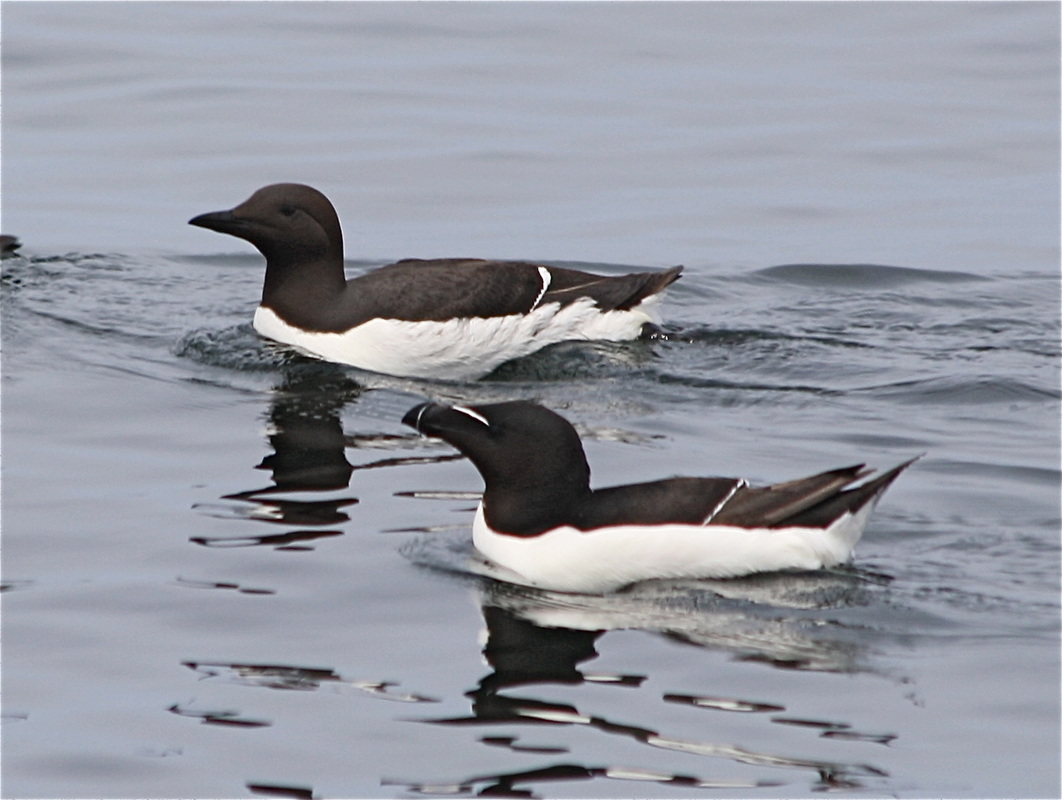 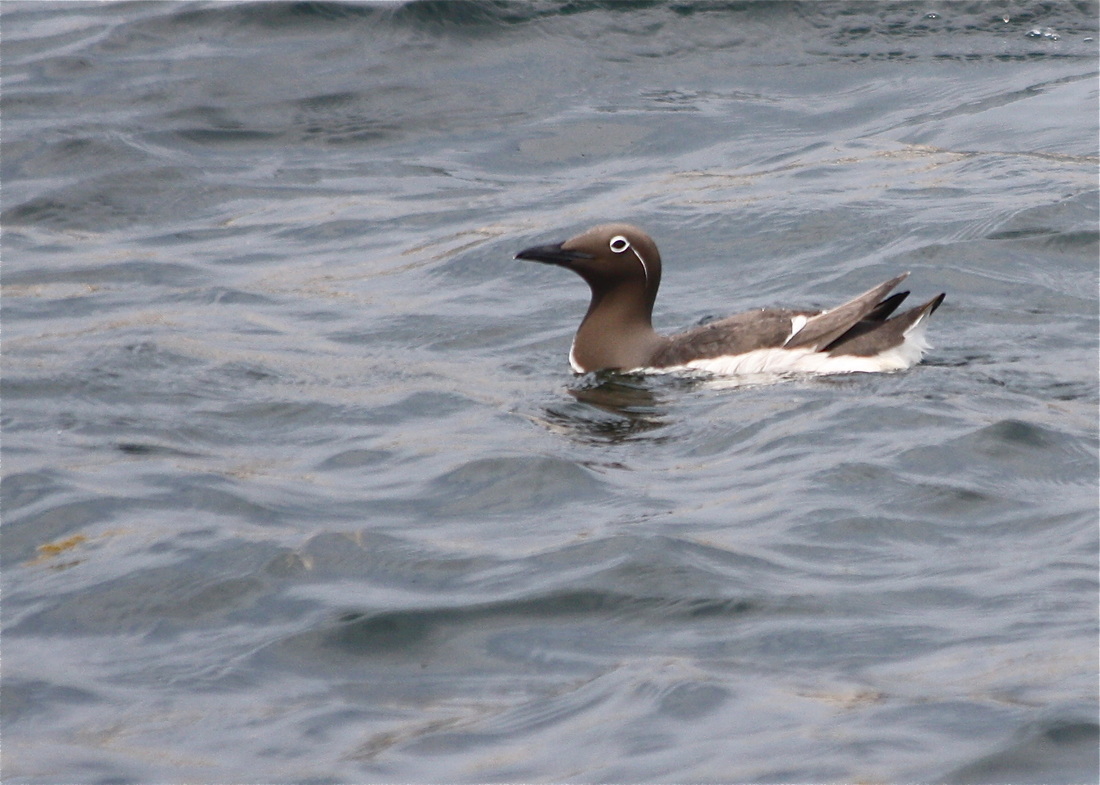 About one in five of the Murre in the area are ringed, or bridled, a sweet looking form absent from the pacific population of this species. 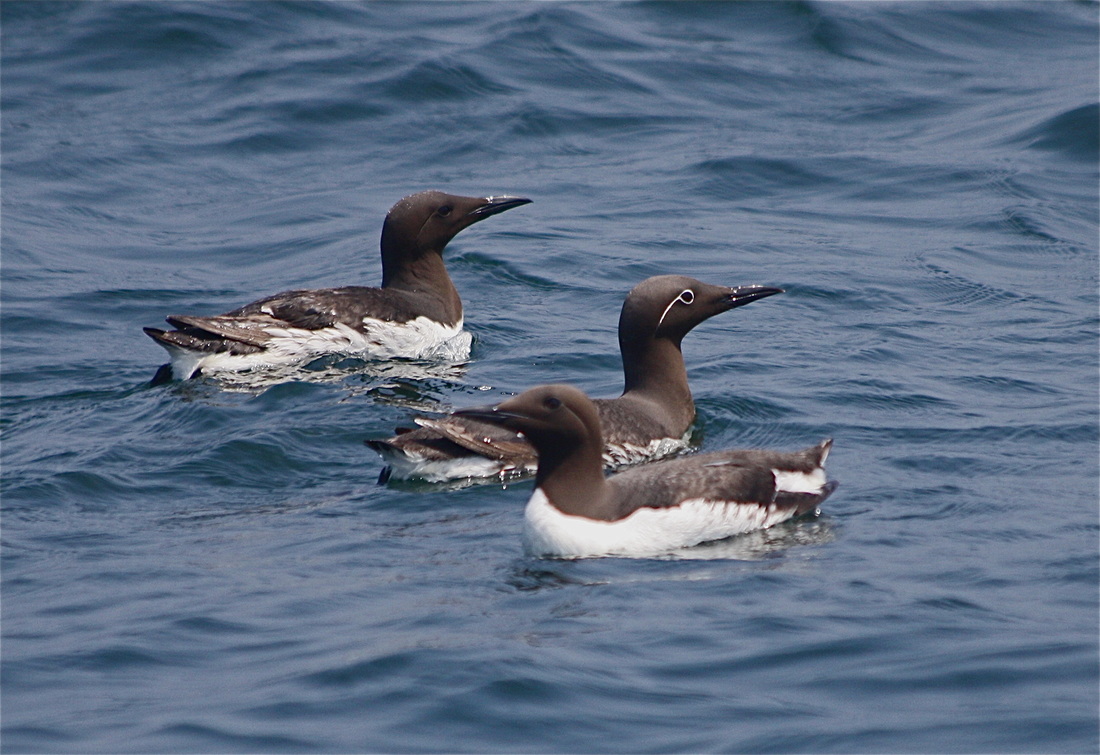 I asked Dr. Tony Diamond, professor at the University of New Brunswick Fredericton long time guide of research at Machias Seal, who represents the Atlantic Laboratory of Avian Research, about changes in the populations of Aclids on that Island, his generous response included the following,

"Murre counts are a real problem because they nest (now) only under big boulders so are impossible to count without causing great disruption. At first they laid out in the open, but the gulls found those soon enough and now they are all under big boulders. Different crews have different degrees of tolerance as to how much disruption they are willing to cause in order to counts eggs/chicks; as a result we have widely varying numbers in different years, from the 176 eggs/chicks in 2003 (the first year they laid, many right out in the open so very vulnerable to gull predation) to 233 in 2004, and two later counts noted as definitely underestimates. In 2014 we identified all the boulders ("caves") they were using and after the murres left, estimated the area under each cave; this came to 27 sq m in total. Murres like to pack in tight, and according to BNA their density can reach 25 pairs per sq m (! yes, really) and applying that to our 27 sq m of murreland gives an upper estimate of 625 pairs in 2014. The number of caves occupied has increased steadily over the last ten years, though we've not documented that as carefully as we might." 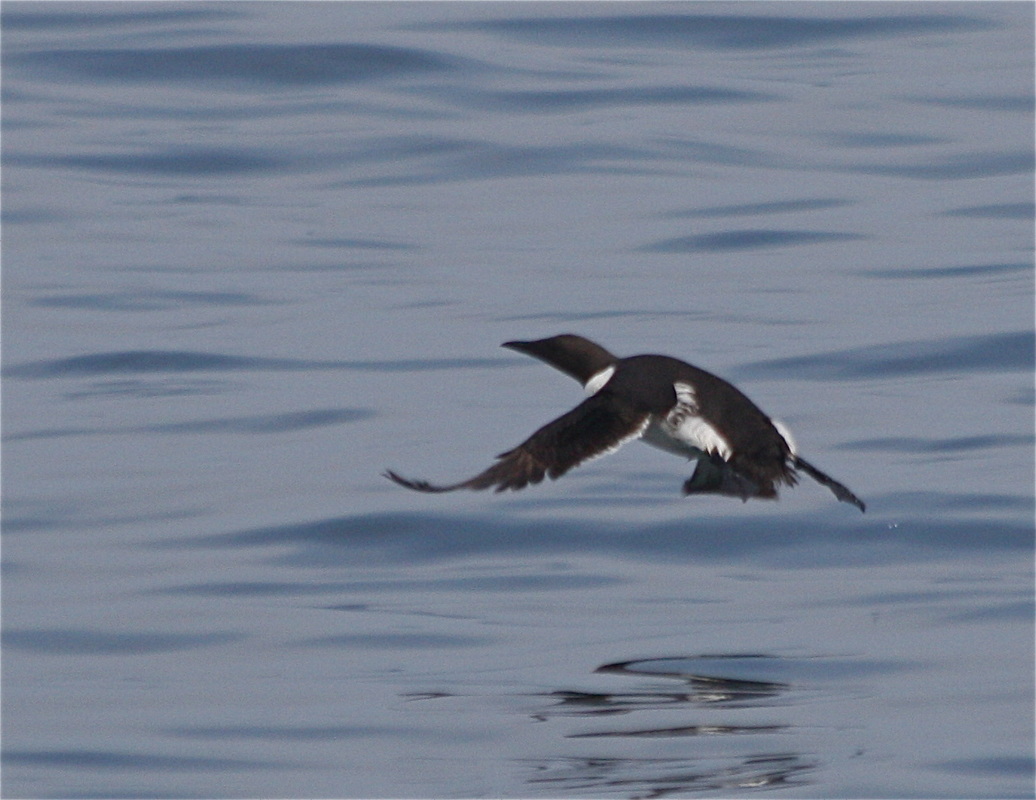 Spreading toes for uplift during liftoff an a calm day. 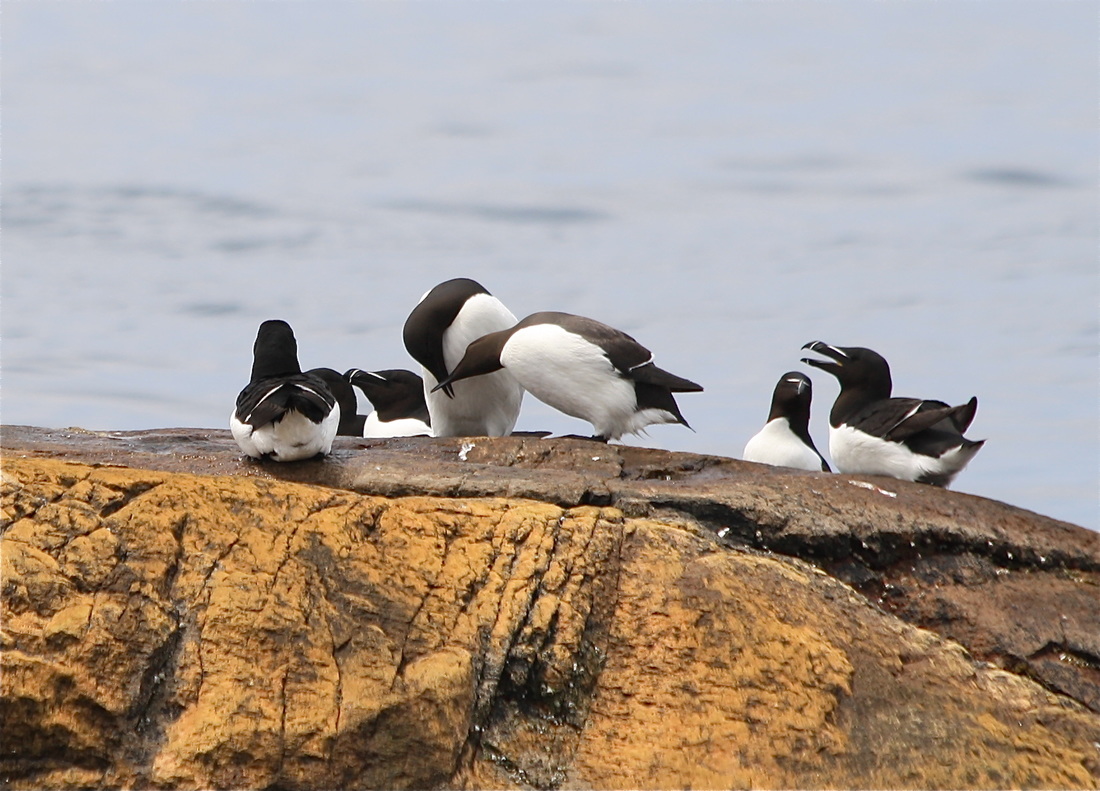 Two murre billing on the shore,  with razorbills Matinicus Rock May 24 '09, taken from shore.

At Matinicus Rock in 2011 there was a high count for the season of  150 Murre, the number of individuals regularly attending seabird colonies at Petit Manan and Seal Island has also been increasing during the last 15 years. 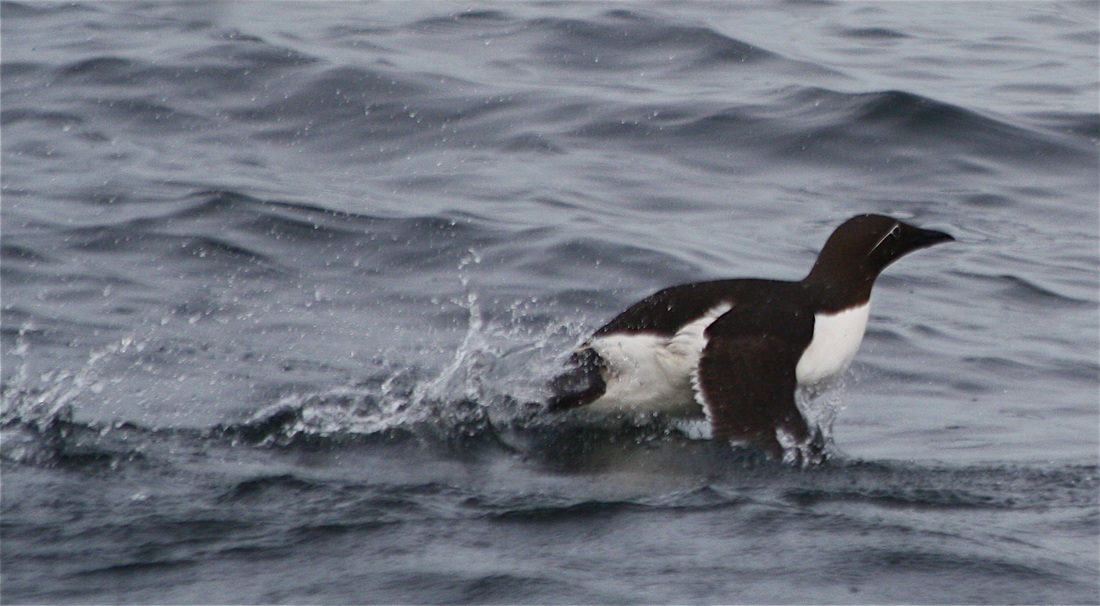 Murres,  are really something fine, a first rate example of functional design,   they can swim all weather,  can dive very deep using wings, can fly,  can walk,  watertight, much to admire. 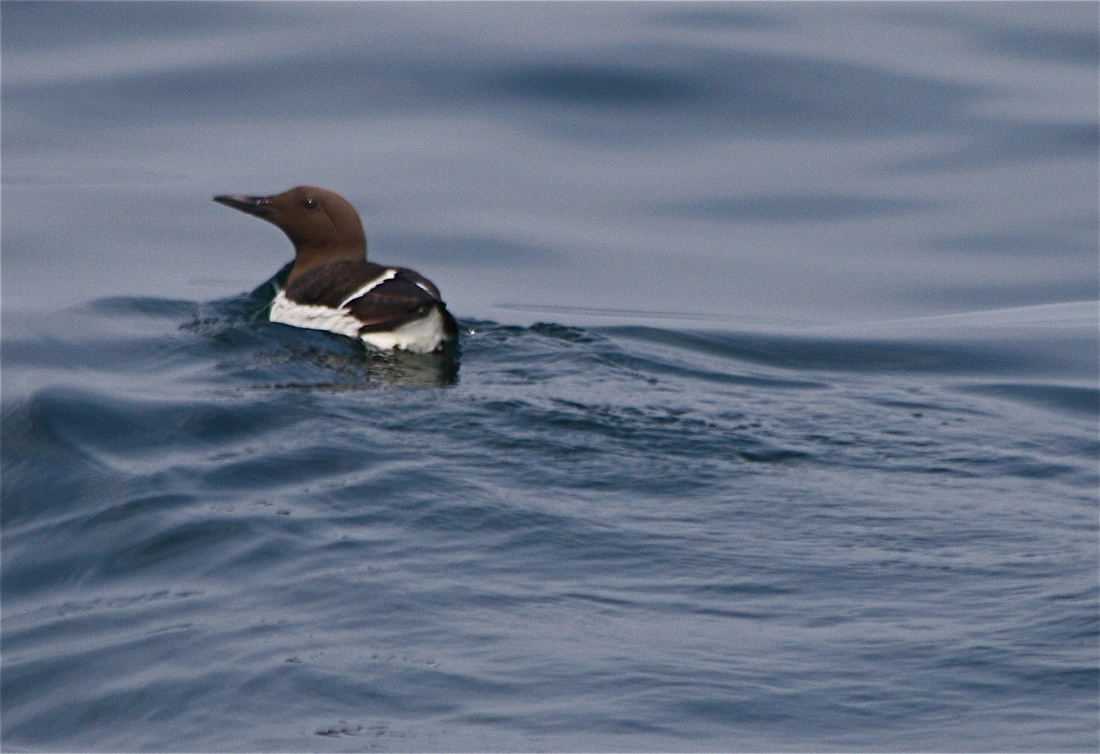 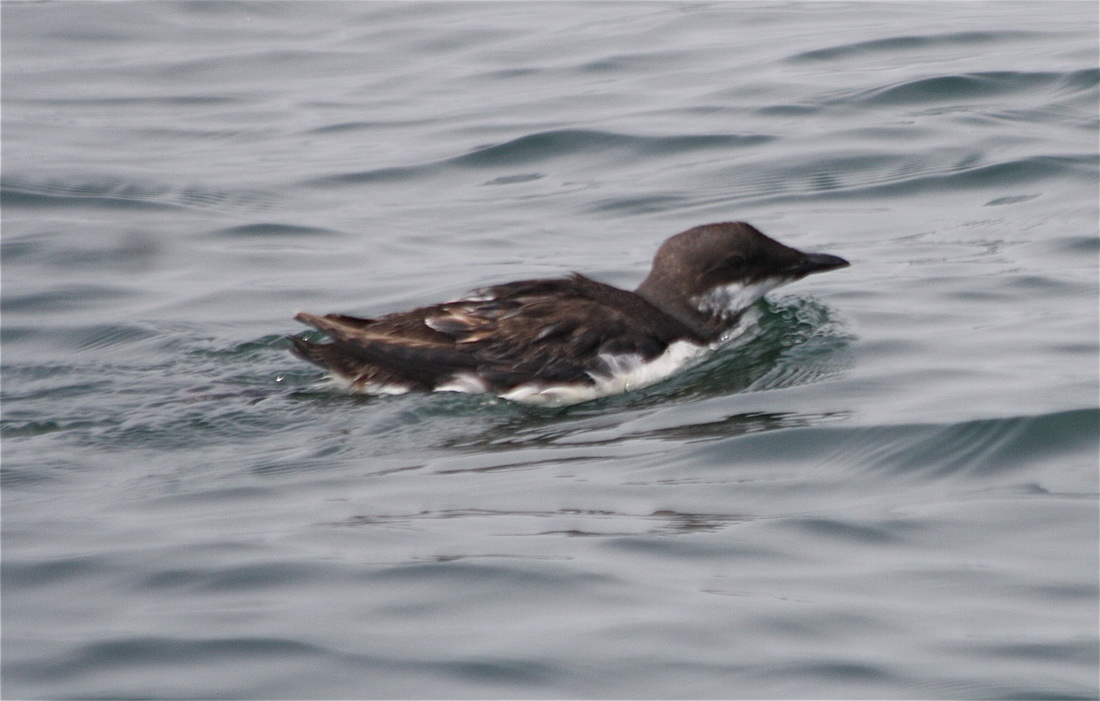 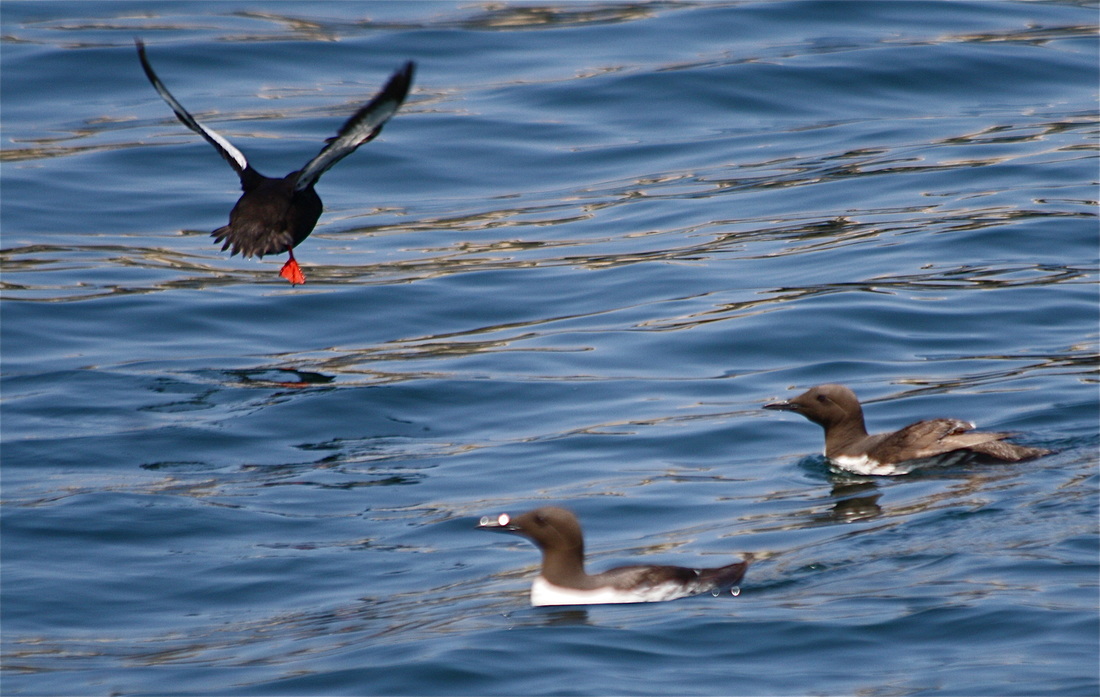