This will be information and photographs, about my charter boat service from Vinalhaven Maine,  I have a 36' Jarvins Newman fiberglass lobster boat powered by a 4 cylinder 115 horsepower John Deere, comfortable and efficient.
There is a lot to see in the area, the land and seascapes are inspiring, and there is a good deal of interesting wildlife that live here.
I can carry six passengers and one crew, I charge $100/hour, or $90/ person for groups of 5 or more for the 3&1/2- 4 hour trip to Seal Island.
I have been birding in the area and involved in bird population research since 1970,
johnbdrury@gmail.com,    207-596-1841,   April-Nov,   207-863-4962 Dec-March 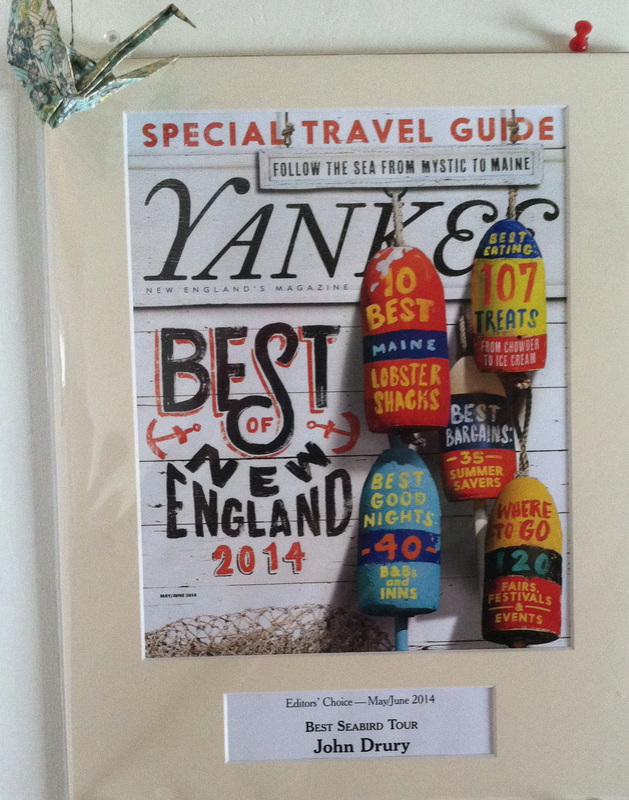 Got this plug from Yankee magazine for which I am grateful,  I was blissfully unaware of the competition,  however now that I know of it, rather than to sit on my laurels,  I'm going for the best seabird tour from the Americas.

This from Keith Mueller, Connecticut bird carver,  check out his carvings they are inspiring. Keith and his wife Jen came along a couple of days and his blog post on the trip included:
"I can honestly say that I have met and been with many bird guides through the years, but two really stand out. To Jen and me it goes deeper than the bird, it goes to the heart of the experience and the person’s willingness to share their knowledge, passions and their love for the birds. The two best birding guides I have met are Merino Chacon from Savegre Mountain Hotel (http://www.savegre.com ) in San Gerado de Dota, Costa Rica (Quetzal expert) and John Drury from Vinalhaven, Maine (Seabird expert extraordinaire)! As an artist, I rely on passionate inspiration to create my art. Spending time with Merino with the Quetzal has opened my eyes and creativity to Costa Rican Highland Cloud Forest birds, and John has done that for me with New England summer seabirds, but mostly for the Red-billed Tropicbird! Thank You John, and Merino!"

I could not find the whole account on Keith Mueller's blog but do check out his amazing carvings at,
http://kmuellerbirds.blogspot.com
He is a student of the arts history and traditions and great master of the art, he carved a double-crested cormorant tussling with two goosander for an eel,  ambitious but he did it.

A Birder from Colorado, John Vanderpoel, came along in early July 2011,  and wrote this account
http://www.bigyear2011.com/seal-island-john-drury-and-the-red-billed-tropicbird

these three were all interested in seeing the Red-billed Tropic bird, another such said,  "this is a great trip regardless of the Tropic bird" which, I believe, it is. 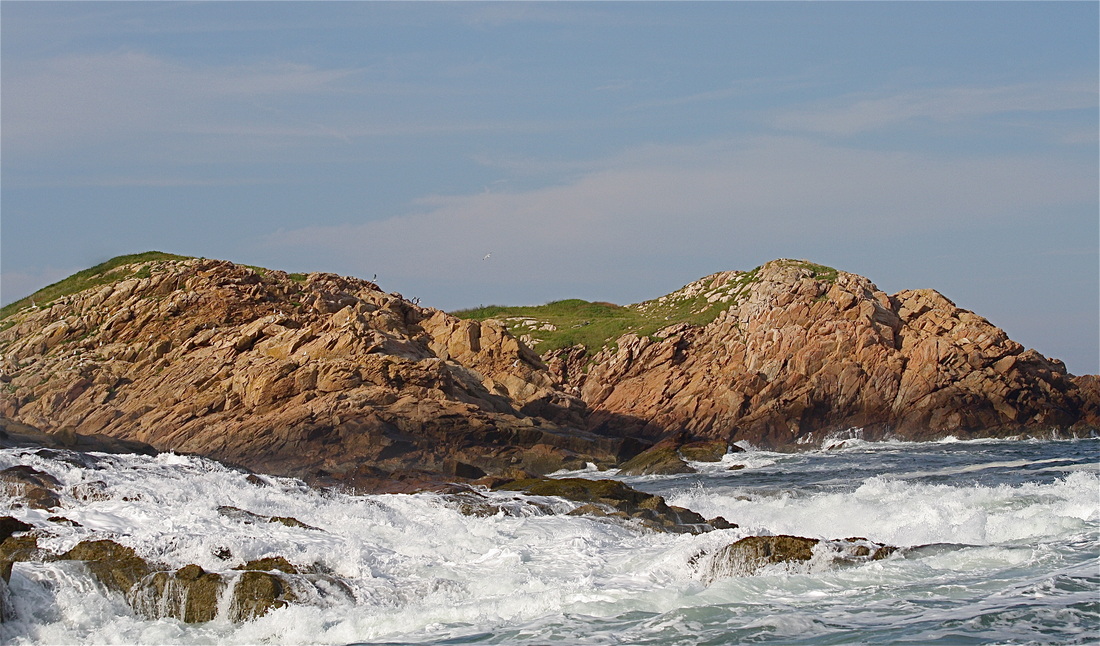 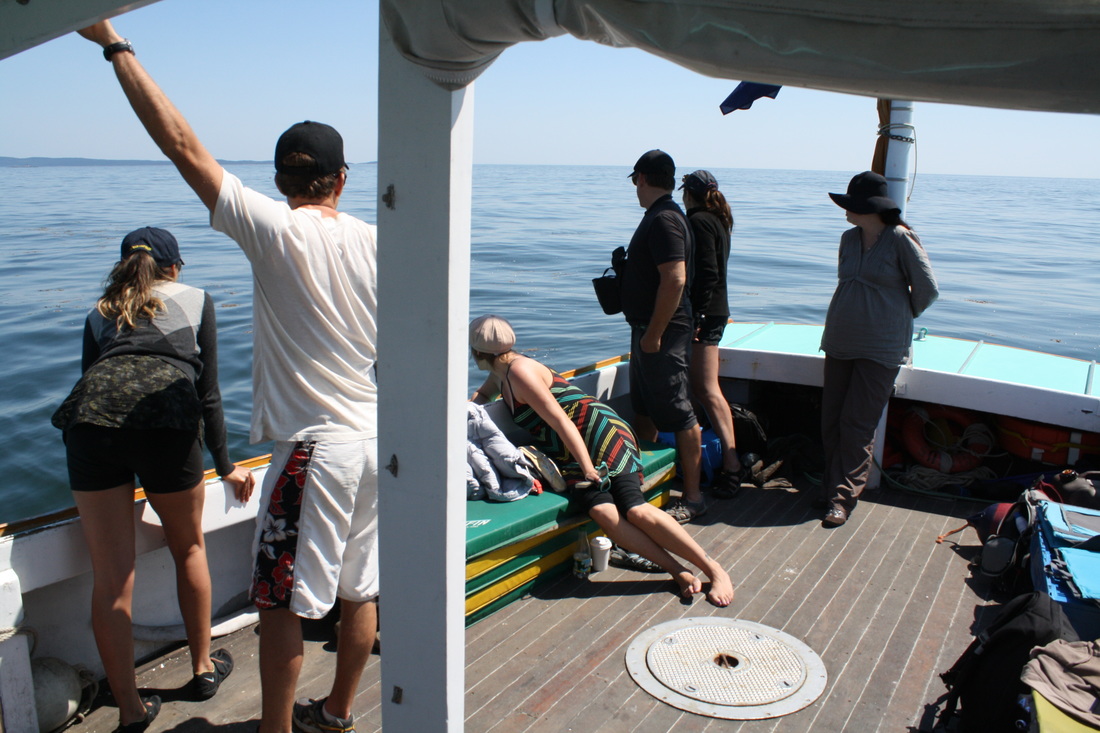 there was a sunfish alongside 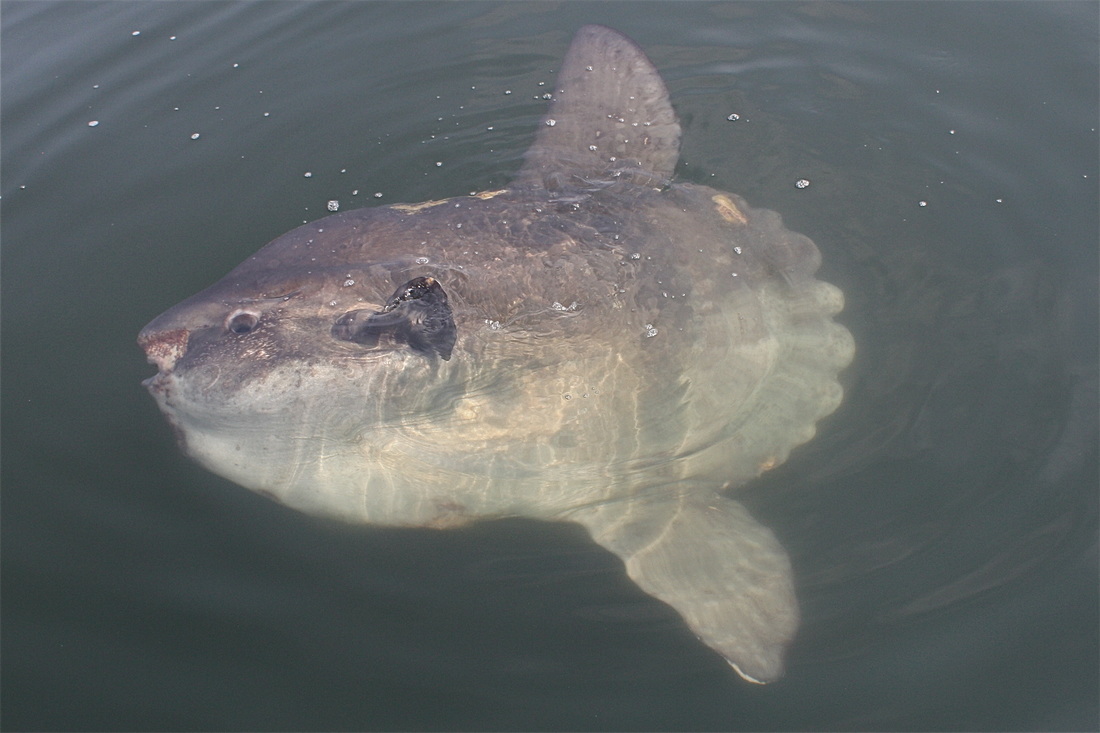 Ocean Sunfish, aka Pez luna,  not a particularly powerful swimmer i guess they are fast enough to catch jellyfish.There is speculation that the creator was distracted before she finished this one 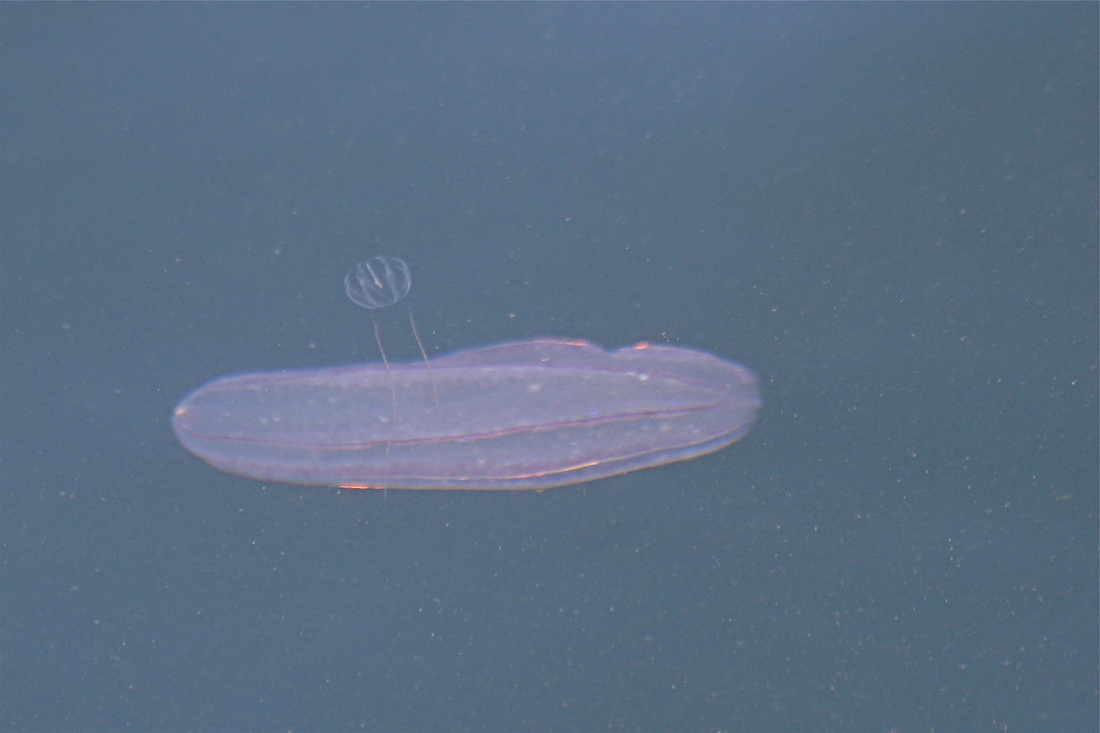 Sometimes there are comb jellies,  or Ctenophores,  I was informed that these creatures are perhaps ancestral to vertebrates, even though they don't have a bone in their jelly back. 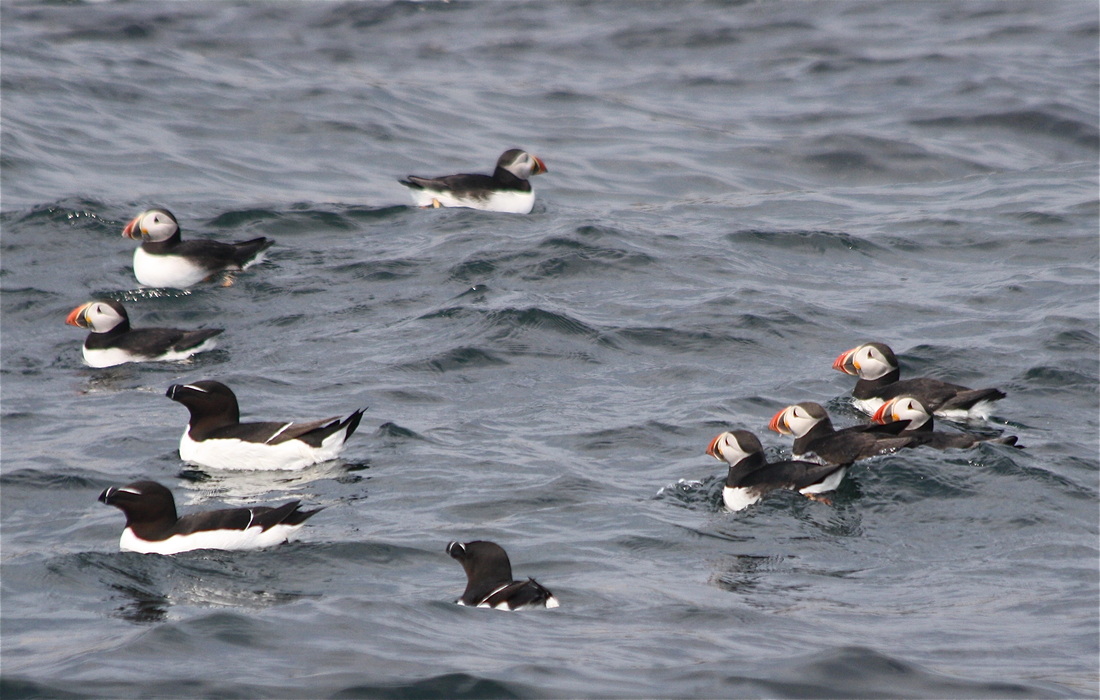 Razorbills and Puffins at Seal Island 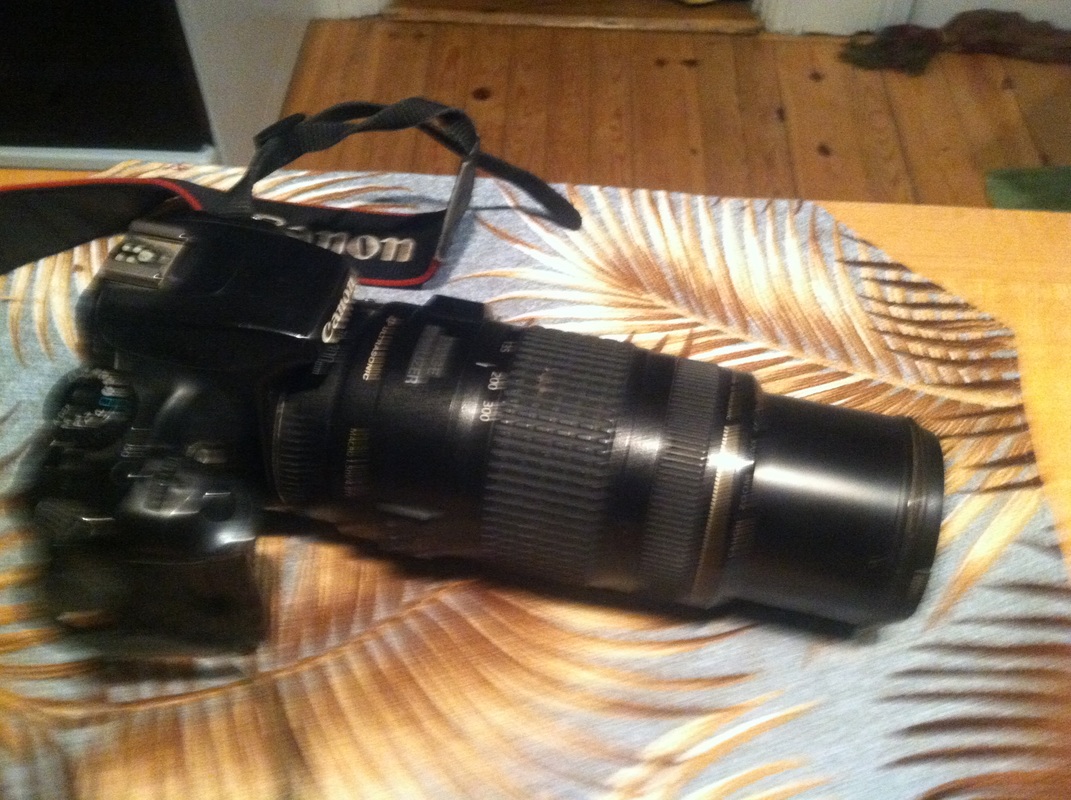 this is me aboard Skua one day in September out past Seal Island we cruised along with  these White-sided Dolphins, well over 100 of them,  for for 2 1/2 hours it was such a thrill to be with them.   (Flora Drury Photo)